On the night of October 11, 1905, a man was found in a semi-conscious condition in the neighborhood of 2214 Ellsworth Street, Berkeley, Cal. His head and face were covered with blood. It was soon learned that he was a man known as “Friday” Ellis, formerly a famous steeplechase rider in England and Australia, who earned his sobriquet because of a sensational ride he made on a horse called “Friday.- Ellis was afterward suspended from the track for “pulling” horses, but he finally became a bookmaker on the Kensington racetrack in Australia.

In August, 1905, he “welched” (refused to pay off bets) and took the next steamer for America. On that trip he was accompanied by a man and woman known as Mr. and Mrs. Brush, also known as Curtis, whom he met at the racetrack. Brush was an expert poker-player.

When Ellis recovered he made the following statement regarding his experience with Brush:

“We arrived in San Francisco on October 2, 1905, and a few days later we moved to a cottage at 2214 Ellsworth Street, Berkeley.

“The first night I spent in the house convinced me that something was wrong, as I noticed Brush and his wife holding whispered conversations when they imagined they were not observed. So uneasy did I become that I spent a sleepless night, and the next day I moved away.

“After much persuasion, Brush induced me to call on October 11. While sitting at the table eating marmalade, he struck me on the head with a hammer. I fell and he robbed me of $500. I recovered slightly while he was robbing me and, struggling to my feet, I gave him battle. At this moment the woman presented a pistol at my head and I staggered out of the house, but after traveling a short distance I fell from loss of blood.”

The officers made a search of the premises which plainly showed where the assault was committed, but no trace could be found of Brush or his “wife.”

Ellis gave a good description of his assailants and added that Brush had told him that he once had a row with a woman near Colorado Springs but that he fixed her all right.

Officer W. E. Atchison of Berkeley then looked up the records and learned the following facts :

On December 16, 1904, two men found the badly decomposed body of a young woman on Mount Cutler, Colorado. A bullet wound in the back of the head showed that murder had been committed and, to prevent identification, the assassin had built a bonfire and thrown the body into it, but the fire went out after the face had been burned so that identification was impossible. All the jewelry was removed from the body.

The young woman had evidently been dead for months, and as there was no report of any missing woman in that locality it was concluded that the victim was probably one of the thousands of tourists from all over the world who visit the neighborhood of Colorado Springs.

An examination of the mouth showed that a great amount of dental work had been done, including bridge work, gold teeth, etc. An elaborate diagram of this work was drawn by a dentist and a photograph of the diagram placed on circulars, which were sent to every Chief of Police in the country with the request that every dentist in each city or town be shown the diagram.

Finally the dentist who did the work was located and he stated that it was done for a Mrs. Bessie Bouton, wife of an electrician in Syracuse, New York, named George Bouton. It was said that she had traveled about the country as the wife of Milton F. Andrews, a professional gambler, who had a wife living in Holyoke, Mass., whom he deserted after stealing her money and jewelry. Andrews was seen with Mrs. Bouton near where the body was found and he suddenly disappeared on October 5, 1904.

Upon getting this evidence Chief Reynolds of Colorado Springs procured a good photograph of Andrews, a copy of which appeared on circulars which were sent to all police departments.

Andrews, who was 6 feet 3 inches high, had a very narrow, deformed chest, and because of stomach trouble was compelled to subsist almost entirely on malted milk.

Officer Atchison found this circular and when he read the description and showed the picture to Ellis, the latter exclaimed : “That’s the man who tried to kill me.”

Great publicity was given to the case, especially to the fact that the desperate fugitive consumed large quantities of malted milk. The description of both Brush and his wife were also published. 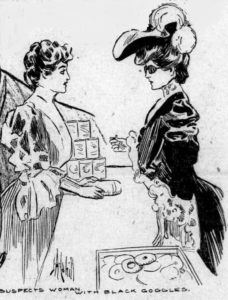 In October, 1905, Mrs. M. Hornbeck conducted a little grocery and bakery at No. 743 McAllister Street, San Francisco. She gained the patronage of a dark-haired and mysterious-acting young woman, who purchased large quantities of malted milk. Suddenly this woman bleached her hair and began wearing smoked glasses. Mrs. Hornbeck had not followed the papers closely and therefore did not realize the significance of these circumstances.

The mysterious woman continued to trade at the store, and three weeks later Mrs. Hornbeck casually mentioned the circumstance to Detectives M. V. Burke and Fred Smith. They trailed the woman to the residence of Jas. Meagher, No. 748 McAllister Street. As it was learned that Meagher could be trusted, the officers confided their suspicions to him and asked about the woman. He laughed at them and said that she was a Miss Eda Little from Sacramento and that he could almost swear that she alone occupied her room, as no one in his house, which was a private home, had ever seen or heard anyone else there. Mr. Meagher’s family were equally positive on this point.

But the officers were not satisfied and Detectives Tom Gibson and John Freel were detailed on the case.

Detective Burke posed as the owner of the property, and Meagher, who rendered every assistance, went to Miss Little’s room and told her the landlord wanted to look at the gas fixtures.

After some hesitation the girl opened the door. The officer looked at the gas fixtures and also looked around the room. Seeing nothing to indicate that the woman had a companion, he stepped outside, but when he did so the woman seemed to be so anxious to get the door closed and bolted that it aroused the officer’s suspicions. He conferred with his brother officers, who were concealed in the hallway, and they immediately asked her to open the door again. This she refused to do. The officers then told her who they were and warned her that if she did not open the door, they would break it. She replied: “If you do I will kill you.”

Just then two shots rang out. The officers burst in the door and found the dead bodies of a young man and woman, each having a bullet wound in the forehead. It was evident that the man had fired both shots and that he was concealed in a clothes-closet when the officer first entered.

It was seen at a glance that they answered the description of Andrews and his companion, who proved to be Nulda Olivia Petrie.

In the girl’s stocking was a lengthy confession written by Andrews. In reference to his assault on Ellis he said :

“I sat him at the dinner-table and tried to comb some of the treachery out of his brain with a hammer. I did not know at the time that he had a gorilla’s skull or I would have used a pile-driver.”

Afterward the detectives obtained evidence amounting almost to proof that on August 2, 1904, Andrews murdered Eugene J. Bosworth at New Britain, Conn., crushing his victim’s skull and robbing him of several hundred dollars and a diamond ring.

Jewelry found in the room was subsequently identified as the property of Mrs. Bouton, who was murdered on Mount Cutler. 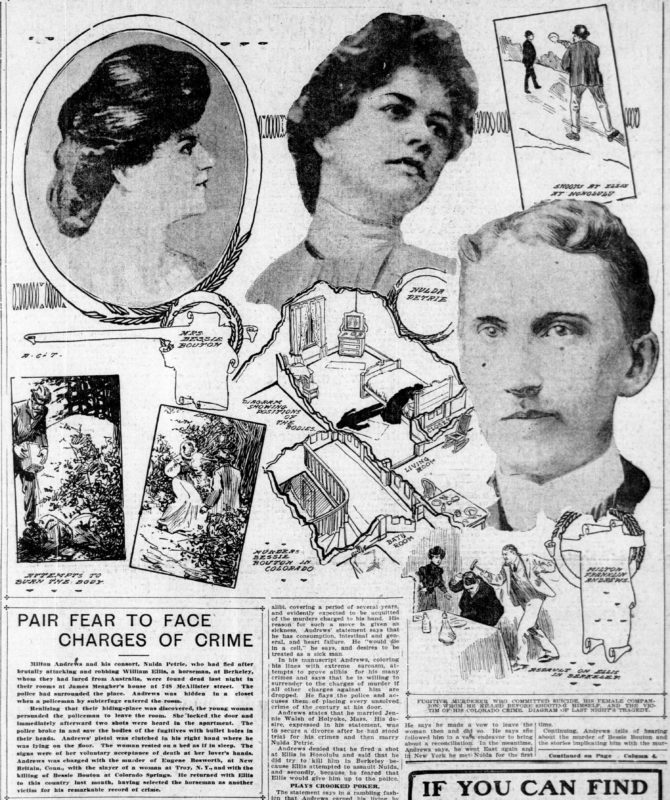