Jimmy Hope was born in Philadelphia in 1836, where he married and raised a family.

On April 6, 1869, a well-dressed man went into the Kensington Savings Bank in Philadelphia and asked for a private interview with the president of the bank, which was immediately granted.

The stranger then informed the president that he was a detective and had been sent by the Chief of Police to inform the president that reliable information had been received to the effect that a gang would attempt to rob the bank that night and that three or four policemen in uniform would be secreted in the banking rooms before the bank closed. After pledging the president to secrecy, the “detective” left.

About 2:50 p. m. the uniformed “policemen” appeared and the two porters were instructed to stand guard with them. Early in the evening one of the porters was sent after beer, and as soon as he left, the “policemen,” who in reality were Jimmy Hope’s gang of safe robbers in disguise, overpowered and gagged the lone porter. When the other porter returned he received the same treatment, and the robbers then proceeded to open the safe. They secured between $80,000 and $100,000 and escaped, but a bitter quarrel occurred when the loot was being divided, which resulted in the killing of three of the robbers.

In this gang were Jimmy Hope, Jim Casey, Tom McCormick, George Howard and three others. Casey was killed by McCormick in New York, and on June 4, 1878, Howard’s body was found near Yonkers on the Hudson River, N. Y. 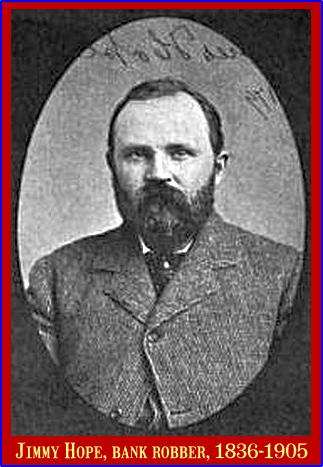 According to an admission made by Jimmy Hope when he was arrested in San Francisco in later years, one of the gang, who was dissatisfied with the manner in which the loot was divided, swore that he would kill Howard, and Hope expressed the belief that Howard’s death was due to this dispute. In 1860, Howard, who had several aliases, resided in San Francisco and was interested in the “Ocean House.”

In August, 1869, Hope, Ned Lyons and two others hired a basement underneath the Ocean Bank, located at Fulton and Greenwich Streets, New York. A partition was erected to obstruct a view from the street and they then proceeded to cut through the stone floor directly under the vault. The entrance into the vault was made on a Saturday night. Over $1,000,000 in money and bonds were removed from the vault, but the bonds were thrown away and they took what gold and silver they could carry without attracting attention, which only amounted to a few thousand dollars.

In 1870, Hope participated in the burglary of the paymaster’s safe in the Philadelphia Navy Yard, but the admissible evidence was not strong enough to justify a trial.

He next assisted in the robbery of Smith’s Bank, at Perry, N. Y. For this crime he was arrested, convicted and sentenced on November 28, 1870, to serve five years at Auburn Prison, New York.

On January 3, 1873, he escaped with three other prisoners.

In November, 1873, Hope and three others rented a house next to the First National Bank of Wilmington, Delaware, and on the morning of November 7 the gang captured the cashier of the bank, who lived near by, and his entire family ; the object being to force that official to open the safe. The servant girl escaped, however, and gave the alarm to the authorities, the result being that Hope and his three confederates, McCoy, Brady and Bliss, were captured, convicted, and on November 25, 1873, they were sentenced to forty lashes and ten years’ imprisonment.

When they had served one year of their term the entire gang escaped.

After participating in numerous other bank robberies of more or less importance, Hope began laying his plans for what proved to be his most conspicuous, and in some respects, his most successful robbery, namely the Manhattan Bank robbery in New York City.

In 1878, Dan Kelley was employed as night watchman at the Manhattan Savings Bank in New York City, which was regarded as one of the strongest banking-houses in America.

At 6 a. m. Sunday, October 27, 1878, Kelley, according to custom, awakened Janitor Wertel, who lived with his family in the bank building. Kelley then went home and Wertel began to put on his clothes.

While dressing, several men rushed in upon him and at once overpowered and handcuffed him. Wertel’s wife and mother-in-law began to scream, but the robbers displayed revolvers and threatened to kill them if they did not stop. While some of the robbers stood guard over the women, others led Wertel into the bank and threatened to kill him if he did not reveal the combination of the safes to them. He complied with their request, and after opening the outer door, the robbers opened the others by means of the safe-cracking tools they carried.

The robbers then quietly departed, leaving all their tools behind them. As there were no marks on the doors or windows, it was concluded that they gained an entrance to the bank by means of a pass key. It was therefore believed that someone connected with the bank was implicated in the robbery and several attaches were placed under surveillance by Captain Thomas Byrnes, who afterward gained an international reputation as Inspector Byrnes.

Among those shadowed was one Patrick Shevlin, who had been employed as a watchman at the bank, but who, after the robbery, spent much time and money at a resort where known thieves congregated.

Feeling confident that this watchman had a guilty knowledge of the crime, Byrnes finally took him into custody, and after several days of cross-examination by the shrewd detective, the watchman made one or two fatal slips of the tongue, and then, realizing that he was cornered, admitted that a gang headed by Jimmy Hope had, after much persuasion, influenced him to enable them to procure duplicate keys to the bank and furnish such information as they desired.

They represented that Shevlin would never be suspected, and that he would be given his share of the money obtained.

Police Officer John Nugent was also charged with complicity in the robbery, but was finally acquitted.

Ten men were arrested in different parts of the United States on charges of having participated in this robbery. Most of them were captured while attempting to dispose of the stolen bonds. 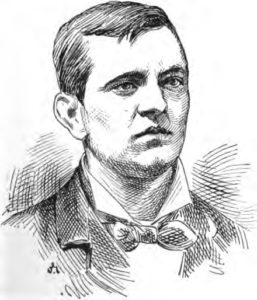 On July 18, 1879, John Hope, Jimmy Hope’s son, was convicted and sentenced to twenty years’ imprisonment, and on December 12, 1879, Billy Kelly was sentenced to ten years’ imprisonment. Jimmy Hope was sent to Auburn prison, but subsequently escaped. John Dobbs, Sam Ferris, John Nugent, Abe Coakley, Patrick Shevlin, Pete Emerson and Ed Goodrich were discharged from custody, Shevlin having been granted immunity for his assistance to the prosecution.

As a result of this theft, the bank was closed temporarily. The officials immediately appealed to Congress and succeeded in having the stolen bonds canceled and duplicates issued.

On June 26, 1881, the janitor of the Sather Bank, southeast corner of Commercial and Montgomery Streets, San Francisco, noticed some dirt near the vault which had evidently fallen from the top of the vault. Suspicion was immediately aroused, and Captain of Detectives I. W. Lees was notified.

On investigation he found that on the second floor, in a dark corner where the janitor kept his brooms, etc., an opening sufficiently large to admit a man, had been deftly cut in the floor and through the lower ceiling over the vault. The next night Lees, with a squad of detectives, kept watch, and during the night their vigilance was rewarded when they observed two men enter a hallway leading upstairs. After allowing time for the robbers to resume operations, Lees and his men entered the building and proceeded at once to the hole in the floor, where they observed one of the burglars in the act of lowering himself to the next floor. Upon realizing that he had been discovered, he whipped out a large revolver, but the detectives covered him with ‘sawed-off shotguns and he surrendered. His accomplice, who had gone up to the next floor, escaped, but it was subsequently learned that his name was Dave Cummings, a notorious burglar, who was afterwards sent to an eastern prison for a long term.

The man arrested proved to be Jimmy Hope. He was found guilty of attempting to burglarize the Sather Bank, and on October 15, 1881, was sentenced to serve seven years’ imprisonment. Upon his discharge he was returned to Auburn Prison to serve out his unexpired term.

A one page obituary and biography of Jimmy’s life published shortly after his death in the Washington Times. (PDF copy of one newspaper page, June 11, 1905.)