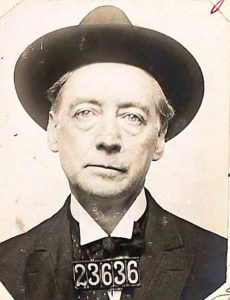 An article appeared in the San Francisco papers of April 24, 1905, to the effect that George D. Collins, the brilliant attorney from San Francisco, had on the day previous married Miss Clarice McCurdy at a hotel in Chicago. Miss McCurdy was the daughter of Mrs. S. A. McCurdy, a wealthy widow residing in Stockton. A few days afterward, Collins returned to San Francisco with his bride and mother-in-law and secured apartments at the Palace Hotel.

William Newman, a member of the Fire Department, appeared before the Grand Jury about this time, and stated that if Collins had actually married Clarice McCurdy he was guilty of bigamy, as he had married his sister, Charlotta Newman, on May 15, 1889, and that Father M. D. Connelly performed the ceremony.

Attorney Thomas E. Curran and Florence Newman, who were present at the ceremony, corroborated this statement. On May 13, 1905, Collins was indicted for bigamy. In his defense, Collins replied that he had married Agnes Newman on the day in question, but that through a clerical error the license was made in the name of Charlotte Newman, the sister. Agnes died in May, 1901, and Collins had a plate put on her casket bearing the name of “Agnes Collins.” He claimed that he had left his three children in the care of his sister-in-law, Charlotte Newman, who was merely his housekeeper.

In answer to this, Charlotte laid bare the remarkable story of her life, which is as follows:

“I was married to George D. Collins on May 15, 1889, and five children were born to us. On April 8, 1890, our son George was born; on September 28, 1892, Consuela was born ; on September 28, 1897, May was born. In 1893 a child was born which died two days afterward, and on April 1, 1895, another child was born which lived only two days. My sister Agnes lived in the same house with us. In the early part of 1891, Agnes confessed to me that she expected to become a mother and that ‘my husband was responsible for her condition. She furthermore said that if I turned her from the house she would commit suicide. I protected her, and she went into seclusion and none of our relatives knew of her condition. In May, 1891, she gave birth to a little girl at St. Mary’s Hospital. To protect my sister’s name, I represented myself to be the mother of the child and Agnes continued to live with us.

“This child was named Susan, and in May, 1901, she contracted diphtheria, from which she died on the 13th inst. Agnes was again in a delicate condition, and she was stricken with the ailment from which Susan died. While in bed suffering from this disease she gave birth to another child, and both died,

“It is true that the words ‘Agnes Collins’ were engraved on the plate of the casket, but Mr. Collins claimed the mistake was due to the stupidity of the engraver and that it was too late to have it rectified.

“Mr. Collins has lived at our home, 2519 Pierce Street, right up to the time that he went East to marry Miss McCurdy, and since his return he spent one night with me and assured me that there was no truth in the report that he had again married.”

After the death of Agnet Newman, Collins obtained the money she had deposited in the Hibernia Bank, on the representation that he was her husband. The attorneys for the bank began disbarment proceedings against him for this act and there was some talk of charging him with obtaining money by false pretenses.

The McCurdys believed Collins innocent and rendered him every assistance. Collins conducted his own defense, and endeavored to prove that the San Francisco courts lacked jurisdiction and that the trial should properly take place in Illinois. This point being decided against him, he endeavored to prove that the Grand Jury which indicted him was not a legalized inquisitorial organization. Neither was this point well taken.

While in the midst of his battle, Charlotta Collins sued him on May 26, 1905, for $200 per month for the support of herself and children. In answer to this suit, Collins swore that he had never -married Charlotta.

His trial began in June, 1905, and the work of impaneling a jury was in progress when, on the morning of June 12, he failed to appear.

An investigation disclosed the fact that a character known as “Bogie O’Donnell,” who had a contract for carrying morning newspapers across the bay on a launch, had also taken Collins across. He was subsequently traced to Victoria, B. C. Under the treaty of extradition between this country and Canada, bigamy is not an extraditable offense, which undoubtedly accounted for Collins’ actions. But as he swore in the civil suit that he was not the husband of Charlotta Newman, he was indicted for perjury and extradition papers were issued.

Detective Tom Gibson was sent after him, and after a legal battle lasting over three months, Collins was returned on October 24, 1905, and was placed on trial for perjury. During this trial he testified that he had never married Charlotta Newman, and for this he was again indicted for perjury on December 29, 1905.

The charge of bigamy and the former charge of perjury were then dropped, and he was tried on the last indictment, found guilty, and on March 10, 1906, he was sentenced to serve fourteen years in State Prison.

As Collins contended that he could not legally be tried for any crime other than the one for which he was extradited, he appealed to the State Supreme Court and to the Federal Circuit Court, but the trial court was sustained in both instances.

Collins was undoubtedly one of the most resourceful lawyers in California and while in the County Jail he devoted all his time to a study of the law and decisions on extradition and perjury. He prepared a lengthy appeal to the United States Supreme Court, but on May 17, 1909, Justice Peckham handed down a decision sustaining the lower courts. In this decision the Justice said:

“It is impossible to conceive of representatives of two civilized countries solemnly entering into a treaty of extradition and therein providing that a criminal surrendered according to demand for a crime that he has committed if subsequent to his surrender he is equally guilty of murder or treason or other crime, is, nevertheless, to have the right granted to him to return unmolested to the country which surrendered him. We can imagine no country, by treaty, as desirous of exacting such a condition of surrender or any country as willing to accept it.”

On June 5, 1909, Collins applied to Governor Gillett for a pardon, which was denied, and on June 17 he was removed to San Quentin Prison, where he was immediately put to work in the jute mill. He was released from prison on April 16, 1918.