On September 12, 1893, some Italian fishermen found a head encased in a wire netting, floating in the bay and fastened with a rope to the shore near Lime Point.

The ears and all the flesh from the face had disappeared, but a few hairs from the head were found in the netting, and judging from their length it was decided that it was the head of a woman.

A few days afterward, a boy named Stephenson discovered the trunk of a woman’s body floating in the bay near Oakland.

Two different theories were advanced, both of which found ready supporters.

One was that a foul murder had been committed, but this was laughed at by those who theorized that the remains were those of some unfortunate whose body had found its way to the dissecting-room and was afterward placed in the bay by students in an effort to create a sensation.

As the body was badly decomposed it was impossible to ascertain from its appearance which theory was correct.

In August, 1893, Miss Addie Gilmour, who with Miss Laura Allen, conducted a millinery store in the little town of Colusa, Cal., came to San Francisco to purchase a supply of goods for the fall trade, but in order to acquire a knowledge of the latest styles, she procured employment with F. Toplitz, a Market Street milliner. She resided at the Elmer House, 314 Bush Street.

About the first of September, her partner came to the city, but on hearing that Miss Gilmour had left her temporary residence and place of employment without any previous notice, Miss Allen returned at once to Colusa. On learning that Miss Gilmour was not at home, she became thoroughly alarmed.

As Miss Gilmour was a quiet, industrious young lady, whose mind seemed to be entirely absorbed in her business affairs, the mystery became greater until at last her twin sister reluctantly came forward and stated that Addie had written to her on September 4 that she was in trouble and about to submit to an operation at the hands of Dr. Eugene West, who was located at 132 Turk Street.

It was then ascertained that she had moved to this address on September 1.

Miss Allen and Miss Gilmour’s brother-in-law, W. K. de Jarnett, proceeded to San Francisco and demanded of West information as to Miss Gilmour’s whereabouts. They were joined shortly afterward by the parents of the missing girl.

According to the statements of the parents, West admitted that he had performed an operation on Miss Gilmour on September 4, and that she died on the 9th. He stated that he gave the body to medical students.

The family dreaded the publicity of a prosecution, but finally made known the facts to the police.

Detective Chas. Cody was sent to arrest West, but he had suddenly left his home, and after some difficulty was located at the home of W. Voorhies at 525 Turk Street.

West had an unenviable reputation among reputable physicians, who spoke in most disparaging terms of him. Upon being taken to police headquarters he was accused of having been responsible for Miss Gilmour’s death, but he denied the accusation.

Working on the theory that the skull and portion of a body found in the bay were a part of the remains of Addie Gilmour, Richard Stewart, a dentist from Chico, examined the teeth and positively identified some gold fillings as work that he had done for Miss Gilmour on February 9 of the same year. Shortly after this a thigh and portion of a woman’s breast were found which had been cut from that portion of the body previously recovered.

After that, small portions of the body were found in different parts of the bay.

On September 26, two Oakland boys saw a coal oil can floating in Oakland creek, which they brought ashore, and it was found to contain two arms and hands, and a foot. It also contained a lady’s purse, hat pins and hair combs, which were identified as the property of Miss Gilmour.

A Miss Annie Staley, who was in the employ of Dr. Eugene West, was suspected by the police of knowing considerable information that would be very damaging to the prisoner if told, but she remained loyal to him, and on September 28 a contract marriage was entered into between her and West, which prevented the prosecution from putting her on the witness stand and also enabled her to visit West in the prison.

Miss Gilmour confided her troubles to a young medical student named D. B. Plymire, who was studying in the office of Dr. Harvey at 1126 Market Street. The only male acquaintance to whom Miss Gilmour appeared to give more than a passing thought was a young man known as “Jack.” She did all in her power to conceal his identity and as Plymire visited her on one occasion when she probably realized that she was about to die, she handed him a letter which she was too weak to tear up, and requested him to do so. He immediately complied with the request, but seeing no suitable place to throw the pieces, he placed them in his pocket.

After leaving her he realized that in case the unfortunate young woman should die, he might appear in a peculiar light, as he was her only visitor. He thought of the torn letter in his pocket, and with the instinct of self-preservation, he arranged the fragments in their proper order and pasted them on a paper. It was then learned that “Jack” was J. C. McGrury, who flirted with Miss Gilmour in June, 1892, while he was a railroad brakeman. After that they became friendly and finally she stayed all of one night in his room on Kearny Street. 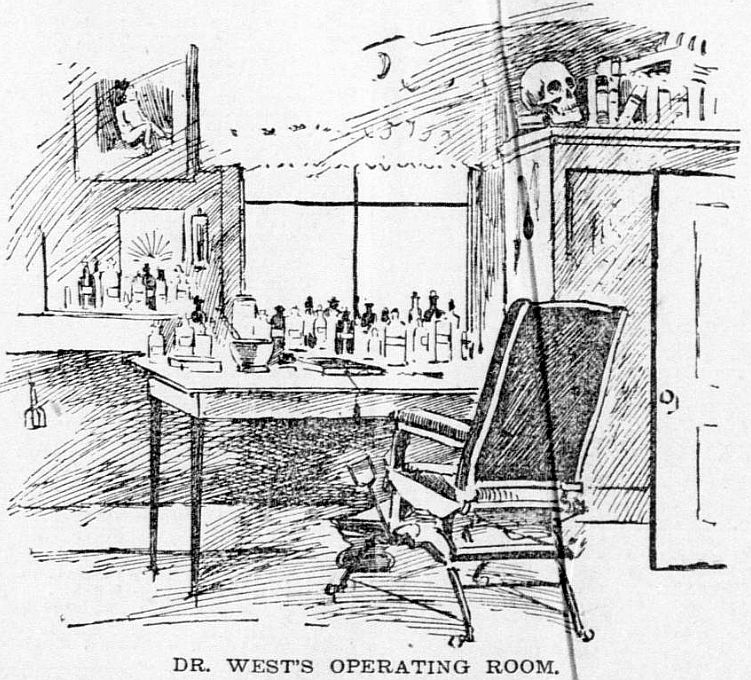 Mrs. Lee Austin, who was employed in the millinery store where Miss Gilmour was last employed, called on Dr. West as soon as she learned the contents of the note Miss Gilmour sent to her twin sister, Emma. She there met a young lady named Miss May Howard, who resided at 815 Clay Street, Oakland. This lady informed Mrs. Austin that she had met Miss Gilmour three times; that two of the meetings took place in West’s office and the third on an Oakland ferry boat.

She stated that on the occasion of the meeting on the ferry boat, Miss Gilmour appeared to be despondent and hinted that she intended to drown herself. She also said that Miss Gilmour entered the ladies’ retiring room, but as she did not come out for a considerable length of time, she, Miss Howard, went into the room and found it vacant and the window open, causing her to believe that Miss Gilmour had jumped into the bay.

Afterward Miss Howard testified that her statement in regard to meeting Miss Gilmour on the boat was false, but that she did see her twice at West’s office. She claimed that West persuaded her to make this statement.

It was the theory of the prosecution that West intended to convey the impression that Miss Gilmour had committed suicide, believing that it would be impossible to identify the skull found in the bay.

West was held to answer, and on February 5, 1894, his trial began in the Superior Court, Judge Wallace presiding. On February 16 he was found guilty of murder in the second degree. On February 23 West was sentenced to twenty-five years’ imprisonment.

The case was appealed to the Supreme Court and a new trial was granted to the defendant.

In December, 1895, the second trial began. The evidence for the prosecution was substantially the same as at the previous trial, but in the second trial West testified that Dr. W. A. Harvey had turned Miss Gilmour over to him and that she was at that time suffering from the effects of malpractice and died on the following morning, but he did not testify that Harvey had performed the operation.

He furthermore claimed that he turned the body over to Dr. Tuchler, who, he stated, intended to use it in the interest of science. He added that Tuchler had subsequently admitted to him that the head found at Lime Point was the head of Miss Gilmour and that he (Tuchler) had placed it there for the purpose of cleansing it.

West also testified that the reason he had previously made conflicting statements regarding the case and failed to testify during the first trial regarding Tuchler and Harvey, was because they were his friends and he desired to protect them.

Dr. Harvey followed West in rebuttal, and testified that there was not one word of truth in West’s testimony regarding him.

After the arguments, the case was submitted to the jury and after deliberating for one hour a verdict of not guilty was returned.