Charles Becker was admitted to be the cleverest forger of modern-times, and the work of Chief Lees and the Pinkertons Agency in capturing and convicting him attracted world-wide attention, as will be seen by the following clipping from the Chicago Detective, one of the leading police journals in the United States:

“The recent conviction in San Francisco of Charles Becker, alias ‘The Prince of Forgers,’ and James Creegan, charged with raising a check on the Crocker-Woolworth Bank from $12.00 to $22,000.00 and obtaining the money from the Nevada Bank of the same city, has brought a sigh of relief to the thousands of bankers of the United States and Europe.

“The imprisonment of Becker disposes effectually of the cleverest bank swindler of modern times, as he is undoubtedly the ablest man intellectually who ever adopted forgery as a profession.

“The Pinkerton agency were employed by the bankers, but they were ably assisted by I. W. Lees, the veteran Chief of Police of San Francisco, who had entire charge of the San Francisco end of the case and whose knowledge of criminals and crime is second to none in the United States.”

The first record we have of Becker is when Joseph Chapman, “Little Joe” Elliott and he burglarized the Third National Bank in Baltimore in 1872. The “Chapman & Elliott Brokerage Office” was opened on the floor over the bank and they tunneled through the floor and drilled the vault. They then fled to Europe and committed forgeries throughout that country, obtaining about $50,000.00. They were captured in Smyrna, Turkey, tried before the English Consular Court and sentenced to three years. They escaped, Elliott and Becker fleeing to London and deserting Chapman.

Chapman’s wife was the custodian of the savings of the trio, and suspecting that his companions would endeavor to obtain money from her, he telegraphed, instructing her to give them nothing. It then became necessary to procure the money by strategy, so on April 13, 1873, they drugged her, but she, having heart disease, died, and they fled to New York, where Becker and Joe Riley passed a counterfeit check on the Union Trust Company for $64,000.00. They were arrested, but Becker was granted immunity for turning State’s evidence, and Riley served a term in prison.

Becker and his father-in-law, Clement Hearing, then forged an enormous amount of scrip of the Philadelphia and Reading Railroad.

At this time they were conducting a lithograph business in New York. Becker was convicted and served a term for this crime. In 1881 Becker was again arrested with his father-in-law for counterfeiting 1,000-franc notes on the Bank of France and served ten years at Kings County Prison.

When released he took James Creegan as a middle man. They invaded every city in the country and left a long list of victims behind them.

In Omaha they defrauded five banks in one day. 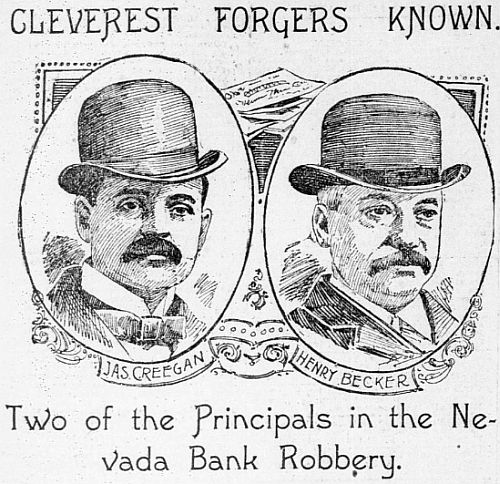 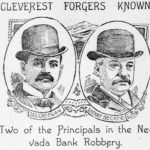 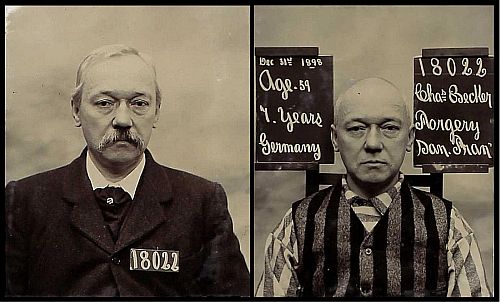 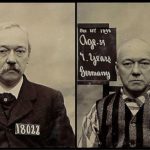 Becker confided in none but Creegan, and the others did not even see him. They lodged in different parts of the city. Seaver rented an office in the Chronicle Building under the name of A. H. Dean, commission merchant, and deposited $2,500.00 in the Nevada Bank, and either drew or deposited almost daily to make it appear that he was a business man. At the Bank of Woodland, Cal., he obtained a draft for $12.00 on the Crocker-Woolworth Bank and gave it to Creegan, who delivered it to Becker. The figure $ “12” $ being perforated on the draft he filled the holes with paper pulp and punched $22,000.00$ instead. He erased and altered the draft to correspond. It was then returned to Seaver, who deposited it to his own credit at the Nevada Bank on December 18, 1895. It passed this bank and also the Clearing House.

The next day Seaver procured a horse and buggy and a messenger boy and went to the bank and drew the $22,000.00 in gold and drove out Mission Street. He stopped in front of a house where he said he lived and bade the boy take the buggy to the stable. After the boy got out of sight, Seaver went several blocks to his room, where McCluskey and Creegan awaited him. They divided the spoils, Creegan taking his own share, also Becker’s.

Becker and Creegan left that night for New York, Seaver and McCluskey following a few days later. The fraud was discovered on January 4, 1896, when the accounts of the Crocker-Woolworth and Woodland Banks were balanced. All bankers throughout the country were at once notified of the methods employed by the forgers and a description of Seaver furnished.

Chief Lees handled the San Francisco end of the case and Pinkertons attended to the East. Shortly afterward A. A. Anderson of the St. Paul National Bank stated that a man of the appearance of Seaver, alias Dean, had opened an account, and about the same time a man of McCluskey’s appearance did the same thing in Minneapolis. Both men were arrested and brought to San Francisco in March, 1896.

In the meantime Becker and Creegan were under constant police surveillance in the East. McCluskey was released because of insufficiency of evidence and went East to Becker and Creegan and demanded that they render financial assistance to Seaver, which they refused to do.

Seaver then confessed and on his testimony, with other evidence already gathered, indictments were found against the other three, and they were returnd to San Francisco. Then McCluskey confessed.

Creegan and Becker not only protested their innocence, but claimed that they were not in California at the time the crime was committed.

By the testimony of porters, conductors, hotel men and others Chief Lees and Pinkerton showed the jury the movements of these men from the time they left New York until they returned.

They were found guilty on August 28, 1896, and sentenced to life imprisonment, but the Supreme Court granted a new trial because of an alleged error in the instructions to the jury. The new trial was set for December 3, 1896, but in the meantime Creegan broke down and confessed, and then Becker did likewise and was sentenced to seven years’ imprisonment.