On May 26, 1904, at the noon hour, a masked man entered the Bank of Placer County, located at Auburn, Cal., and drawing a revolver, ordered the employees present to hold up their hands. He then stole $5,000.00 and disappeared.

At that time, many circumstances pointed toward Adolph Weber as the robber. He was the son of Julius Weber, who being in prosperous circumstances, retired from the brewery business, and resided with his family in the suburbs of Auburn. At the time of this robbery, Mr. Weber Sr., missed a home-made money bag from the house and it was said that the evidence against young Weber became so convincing that a compromise was effected to avoid a prosecution.

The Weber family consisted of Mr. and Mrs. Weber, an eighteen-year-old daughter named Bertha, and two sons, Adolph and Earl, aged twenty and eight years respectively. Earl was an invalid.

On November 10, 1904, about 7 p. m., the Weber home was burned down. At the time the fire was discovered, the son, Adolph, entered a store conducted by one Cohen in Auburn, and purchased a new pair of trousers. He wrapped up his old pants and running to his burning home, broke in the window with his hand and threw the trousers into the flames. In breaking the window, he cut his hand, so severely that he became weak from the loss of blood, and spent the remainder of the night at the home of Adrian Wills.

When the fire was first discovered, a man named George Ruth broke in the door and found the bodies of Mrs. Weber and Bertha in a room which had not been reached by the fire at that time. Bullet wounds were found and they had evidently been dragged into this room after being killed and an effort had been made to set their clothing on fire. The little invalid boy, Earl, was not yet dead, but died shortly afterward from the effects of blows delivered on his head by some blunt instrument. The body of the father was not found until the following day, and bullet wounds were also found in his body. 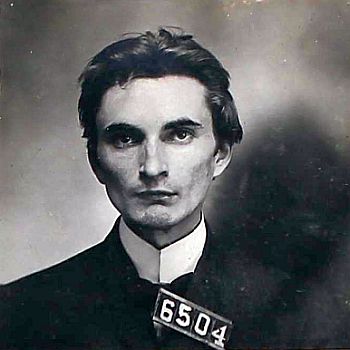 At the conclusion of the coroner’s inquest on November 12, 1904, Adolph Weber was placed under arrest on a charge of murder. Mrs. Snowden, the aunt of Julius Weber, testified that after the murders, she told Adolph that she believed that he knew a great deal about the crime, whereupon he flew into a rage and said: “Your turn will come next.”

The trousers which Weber threw through the window were subjected to an examination and blood stains were found thereon.

On November 21, 1904, a 32-calibre revolver was found under the flooring of the barn in the rear of Weber’s house. All the shells were exploded and on the handle of the revolver was found clots of blood and some of the little boy’s hair. The murderer had evidently used all of his cartridges in killing the other three and used the butt of his pistol to finish the invalid child.

Henry Carr, who conducted a pawnshop on Dupont Street, in San Francisco, positively identified this pistol as one he sold to Weber in July 1904, when he came to Carr’s place with a companion, who purchased a pair of brass knuckles and a blackjack.

J.A. Powell, a mining man from Bullion, testified that about 7 p. m. on the evening of the murder, Weber entered the washroom of the American Hotel and began to wash his hands. His actions were so peculiar that Powell watched him very closely, and when Weber observed that he was being watched, he fled from the washroom without drying his hands.

On November 23, Coroner Shepperd and other officers were digging in the yard of the former Weber residence and unearthed a 5-pound lard can full of $20.00 gold pieces, which was evidently the proceeds from the bank robbery.

When the bank robbery was committed, the robber dropped his pistol, which was afterward identified by a pawnbroker from Sacramento named Lichenstein, as one he had sold to Weber.

His trial for the murder of his mother began on February 6, 1905, and on February 22 the jury brought in a verdict of guilty of murder with the death penalty attached.

Numerous appeals were taken; also a stay of execution was granted pending his examination for insanity, but on September 27, 1906, he was hanged. He maintained the same stoical indifference on the gallows as he had shown throughout his incarceration.

Weber’s relatives undoubtedly knew that he committed the bank robbery, and his motive for committing these murders, which have few parallels in the annals of crime, was probably for the double purpose of forever sealing their lips and to gain possession of the Weber fortune.