Story by Tom F. Callaghan, Chief of Detectives, Council Bluffs, Iowa, and
Dalton O’Sullivan, Detective and Author of Enemies of the Underworld, 1917

Bert Forney was proprietor of a saloon, 1028 West Broadway, Council Bluffs, Iowa. He was not a quarrelsome man, but was a man of more than ordinary nerve, and one who would fight to the death before letting anyone hold him up and rob him. 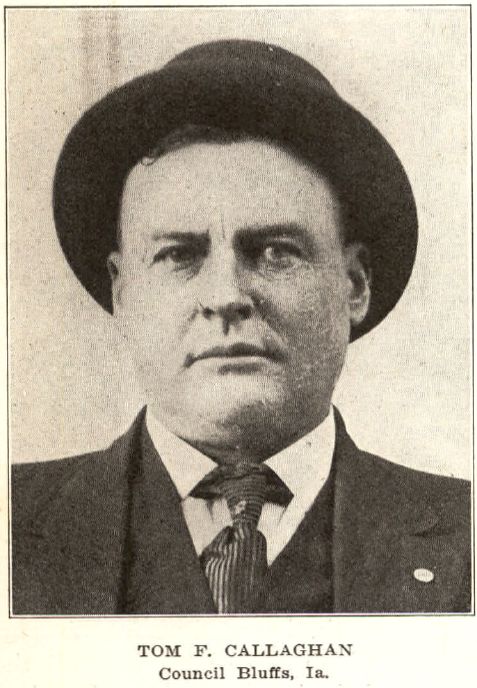 On the night of April 3, 1903, he was sitting at a table playing cards with a friend, James Chaney, when the back door of the place opened and a loud command, ‘HANDS UP!’ was given by a man wearing a mask and pointing a six-inch barrel revolver at Bert Forney. Forney sprang from his chair and ran behind the stove. The robber fired, shooting through the drum of the stove. Then Forney ran toward the door of a little side hallway hoping thus to secure a vantage point from which he might return the fire of the robber.

Reaching the little hallway, Forney turned with the intention of shooting at his assailant and had his right arm raised with his revolver pointing at the man, when the third bullet from the robber’s revolver struck him just under the right shoulder and plowed its way clear through his body and Forney dropped to the floor dead.

One bullet went through the drum of the stove, the second lodged in Forney’s hip while he was running and the third as described. When I arrived at the scene of the shooting, I saw that the only living witness to the murder was James Chaney. He gave me a description of the man that had done the shooting and stated if he ever should see the man again, he could identify him by his build and particularly by his piercing eyes.

The next day, at approximately 10 a.m., I received a phone call from someone that refused to give his or her name, but stated that the man that killed Bert Forney had a package of laundry at the Evans’ Laundry and that he was to call for it at 4 p.m. The caller also said he was registered at the Kiel Hotel but could not tell under what name. Two officers were sent there to watch for the man that was to call at 4 p.m., but 6 p.m. came and yet no call for the package. I went to the laundry at six o’clock. I was the only plainclothes officer working nights. I hid back of the entrance behind a rack where I could see him but he could not see me.

After waiting one hour, he called for the package, said he was Frank Parsons, and received it. Then, as he left the door going across the street, I followed on tiptoes, caught a firm grip on the lapel of his coat, pointed my revolver that I held above my hip at his stomach, and told him he was under arrest. Gritting his teeth, he reached for his gun, which he carried beneath the left band of his trousers, and as he grasped the handle again and again I threatened I would kill him if he did not throw up his hands. He did as commanded but for some time he tried to break loose. With a lot difficulty, I finally got him to the police station. 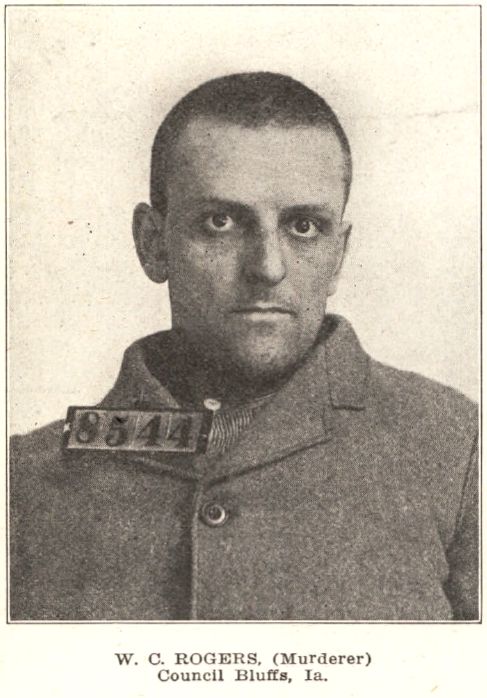 I recognized him as William. C. Rogers, a member of the notorious Burrier-Rogers-Dolan-Tucker-Stevenson gang that made their headquarters at Lake Manawa, Iowa, the year before. I had seen him in the Jarvis Saloon two nights before when I sent A. A. Kirk, a patrolman, in the saloon to look at him so if anything came off that night we would know he was here. This fact was very important as Rogers claimed he was not in town for almost a year until the day he was arrested.

The revolver Rogers carried was a six inch blue steel, .41 caliber Colt. Three new shells had been recently put in the gun; three other shells were evidently in the gun for some time; three shots had been fired in the Forney saloon. To see if the rest of the tip was correct, I went to the Kiel Hotel where I found his personal effects in a room where he was registered under the name of Frank Parsons.

Dr. V. L. Treynor, Coroner and Dr. M. A. Tinley, held a post mortem on the body of Forney. One bullet that hit the hipbone was almost split in two, but the bullet that struck under the arm and was found in the fleshy part of the victim’s other arm, was perfect, having missed hitting any bone whatsoever. Dr. M. A. Tinley fired two bullets out of Rogers gun—the ones that were found in the gun—into loose clay. Both bullets showed the rifling imprints, imperfect, yet both alike. The gun had rusted on the inside of the barrel causing the rifling to produce a different imprint on the bullets all the way around.

We took the perfect bullet that was taken from Forney’s body and one fired from Rogers’ gun into the soft clay and with the points in opposite directions we placed them together. We turned them to match the markings and each and every mark was twin for twin all the way around. One rifling imprint would be deep in the center, one real shallow and some of them barely seen. The formation was there to stay and was as solid as the steel trust itself. We also weighed the bullets; they were the same in weight. We compared them with bullets fired from another .41 Caliber Colt revolver but no rifling imprint matched those from Rogers’ gun. This bullet evidence, we found after the trial, was the most convincing of any or all other evidence. 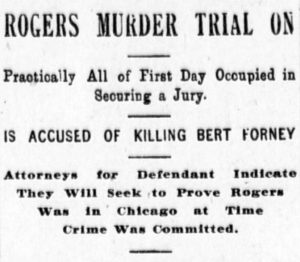 The Grand Jury indicted W. C. Rogers for murder in the first degree. He was defended by able counsel, W. A. Mynster and John Lindt. W. H. Killpack was the county and prosecuting attorney, J. J. Hess, assistant. The case was continued from two terms of court on account of the defense but finally went to trial, February 9, 1904. We secured two witnesses who saw Rogers the day before the murder, and two who saw him on the day of the murder. The defense had sixteen witnesses; the State had thirty-two.

In 1906, his case was taken to the Supreme Court of Iowa and the lower court upheld. He has since tried several times to be paroled. He is wanted for other crimes at Minneapolis, Minnesota, and Clinton, Iowa.

From what I can learn of him, he was arrested in Denver as far back as 1890 at which time he had already secured a reputation and was known as “Omaha Billy.” He was next, as far as I can learn, incarcerated in the Ft. Madison Penitentiary under the name of “Billy Miller” along about 1891, for a short term. He is credited with serving terms in the penitentiaries in Minnesota and Wisconsin and finally drifted over to Ohio where he received a three-year sentence from which he was released in March 1902.

Owing to the fact that he had powerful friends in Omaha backing him—rich fences that had been receiving his plunder—furnishing money and counsel and the great effort that was put forth to clear him, I consider this one of the greatest cases ever tried in this locality and the fact of the convincing bullet evidence was original  here [the first time ever used in that courtroom] as far as I can ascertain. It was at least the most complete and convincing that I ever heard of.