First Person Friday: I was a Killer’s Captive, 1954 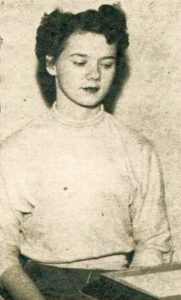 Mary Rombalski, 19, was held captive by a killer during a road trip from Texas to Hollywood, California. Click on the link below to read her first person account.

Editor’s Note: In 1954, Mary Ruth Rombalski was a nineteen-year-old girl from Kentucky who, like many young girls from that era, dreamed of moving to Hollywood where she would become a movie star. After leaving her husband in Milwaukee (a marriage that never should have happened in the first place and he was glad to see her go, she says), Mary went from town to town working as a waitress, trying to save enough money to get a bus ticket to Los Angeles. In December, she was working in Brady, Texas where she met local loser and Army reject, Max (Red) Stapleton, also 19, who promised to take her to Los Angeles. Along the way, he robbed a liquor store in El Paso, and shot to death California gas station owner Orville Johnson, 55, during a hold-up. Mary, who was held captive for most of the journey, was able to escape from “Red” before he crossed the border into Mexico. She reported Red’s crimes to Nogales, Arizona police who arrested him on January 7, 1955. She was also arrested, held as an accessory, and both were transported to Kern County California, where Stapleton was indicted for first-degree murder. Her first person account of her life, and what happened during her time with Stapleton, was published in the May 1955 issue of Front Page Detective, which was placed in the public domain on Internet Archive.